Prior to his recent relocation back to Canada and the greater Vancouver area, Derek was identified amongst the most accomplished bagpipers in the northeastern United States.

A transplanted “Canuck” for most of his life, Derek originally hails from Kirkland Lake, Ontario. Both parents were born and raised in Scotland (Hamilton and Inverness), emigrated to Canada in 1956, and made a final move to Cleveland, OH in 1963. His formal education was completed at Oberlin College, OH (BA, Biology) and The George Washington University, DC (Masters, Health Care Management). 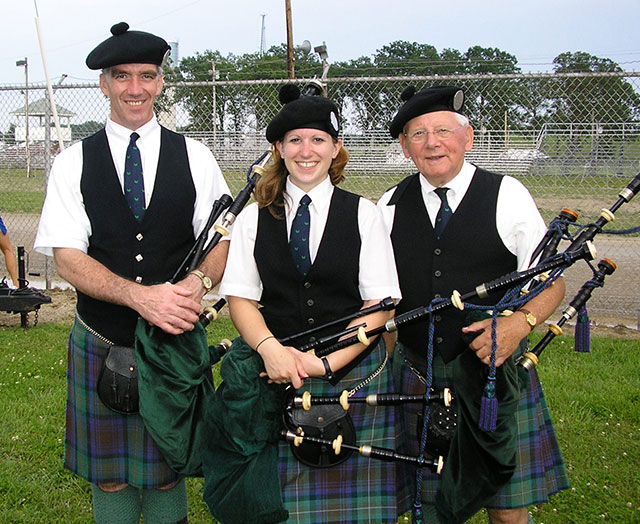 Derek’s passion for the Great Highland Bagpipe and his Scottish heritage joyfully began at the tender age of ten. Derek flourished under the tutelage of John Crawley, who received his training at the College of Piping, Glasgow, Scotland. Band and solo instruction was also acquired from Noel Slagle, Pipe Sergeant of the Grade I Clan MacFarlane Pipe Band, St. Catharine’s, Ontario. More recent instructors have included Jimmy McIntosh MBE (Member of the British Empire & pictured), Peter Kent, and Scot Walker, all open pipers and adjudicators for the Eastern United States Pipe Band Association (EUSPBA). 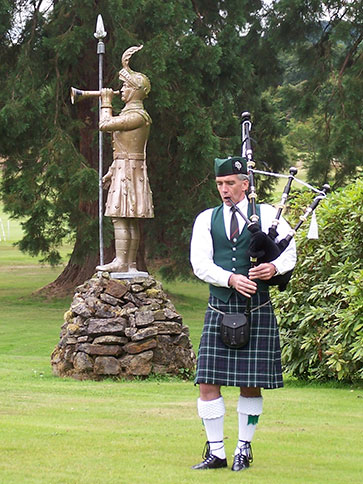 Derek performing in Drymen, Scotland for the Duke of Montrose, his family, & Clan Graham of North America.

Derek’s goals as a bagpiper are to continue his passionate lifelong study of the instrument and convey his knowledge and skills to others. He has competed successfully in solo competitions through the Grade I Amateur level, winning prizes throughout the United States and Canada.

In his 47 years of piping, Derek has acquired extensive experience playing for Highland dancers, dance competitions, weddings, funerals, and in a variety of performance venues. He is listed as an approved competition dance piper with FUSTA (Federation of United States Teachers and Adjudicators) and ScotDance Canada.

Some piping achievements that he considers noteworthy include the following: 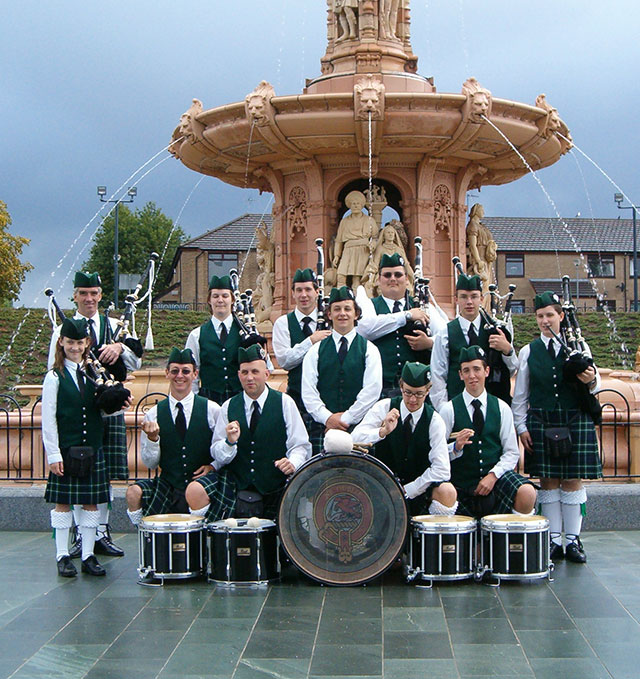 Derek has a deep interest in bands, their development, and band competitions. Beginning in a social or parade band, the Cleveland Caledonian Pipe Band (Ohio 1969–1981), he has since been an original member of the Western Reserve Pipe Band (Cleveland 1970s–1980s) and the Lehigh Valley Pipe Band (Allentown, PA 1989–1998). The latter two bands originated as parade bands, competed through the lower grades (IV, III), and achieved championship status in Grade II.